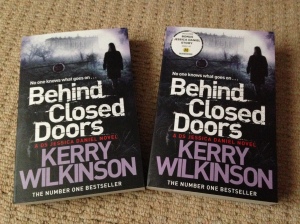 Up until last month, I’d never written a short story. That is particularly odd, seeing as my seventh crime novel is about to be released. I also have a young adult-adventure-fantasy series coming this year, plus Something Wicked, the first in the series of Andrew Hunter books.

I write all the time, pretty much every day. I’ve got so many notes about future projects that I’m never really sure what to do next.

The thing about writing novels, certainly in my case, is that I have all sorts of little ideas knocking around. Characters who just don’t fit into novels; plots that are too short to be incorporated into a wider novel; scenes that would be out of place.

Last month, my publishers asked if I’d be up for writing a short story to work as an exclusive piece of bonus content for one of the shops who will be selling my books. That’s the thing with writing books, you need someone to sell them. Amazon are great, they really are, but not everyone wants to buy online. Tesco have been incredibly supportive, too, plus the Arndale Waterstones and a few other places. Sometimes retailers want a little something in response to their loyalty, which is fair enough. It all works two ways.

So I wrote a little 6,000-word story, of which I’m ridiculously proud, largely because it went from blank page to finished in six hours. Sometimes things take on a life of their own, almost writing themselves and this was definitely one of those.

It has a very simple title:

———————–
APRIL
It’s every parent’s worse nightmare.
April Willis is walking to school when someone in a white van tries to snatch her from the street.
It’s the second attack in less than a week, and, with parents and students beginning to panic, it’s down to Detective Sergeant Jessica Daniel to find the culprit.
———————–

From next week (I’m not sure of the exact date), the supermarket Morrisons will be selling a version of the Behind Closed Doors paperback with “April” in the back. Incidentally, that isn’t a sticker in the picture. It’s part of the cover, meaning it is a genuine limited edition. It is only available in stores and, as far as I’m aware, when they’re gone, they’re gone. Certainly within the first week, there should be no distribution problems but after that, I don’t know. I know it’s rare there’s something that’s an actual limited edition. Usually there are millions of the bloody things floating around with “limited” on the cover. They’re as limited as a red-top front page is “exclusive”. It’s marketing nonsense.

With this, that’s not the case, it really is limited. If you want one, get to a Morrisons in the week or so after the release date of 16 January. You never know, if one of you run me over next week (please don’t), it’ll suddenly soar in value.

Now, I know exactly what many people will be thinking: What about the ebook version?

On that, you’ll have to trust me for a little bit. It won’t be out in digital right away but it will come – promise – and we’ve got something pretty neat planned for when it does. Trust me.