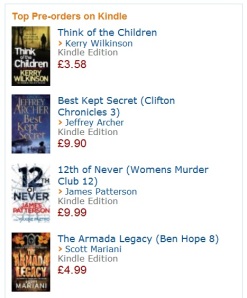 The title pretty much says it all.

I’m not sure what to say, really. The publishers haven’t even begun marketing, yet the fourth Jessica Daniel book, Think of the Children, is the no.1 pre-order on Kindle in the UK, a full four weeks before it’s even out.

This is entirely down to the many, many fabulous readers who have read the first three Jessica books and waited so patiently for its release since The Woman In Black was out in November 2011. I’ve been waiting too … I finished the first draft in the same month, so it’s been 16 months since then. I can barely remember half of what happens in it!

The good news is the Jessica 5: Playing with Fire is coming in July 2013. It has an amazing blow-you-away cover to look out for.

So, after a 16-month wait, you’ll have two Jessica books within five months. Whew.

Guess what? Jessica 6: [Title under wraps for now!] won’t be too far behind either.

Thanks so much to everyone who has pre-ordered it. Now I just hope you enjoy it.